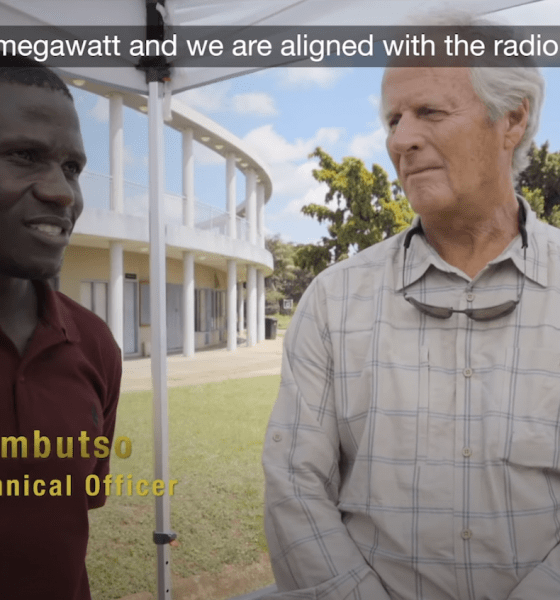 A Story of Free Energy

If you don’t believe that we live in a controlled Narrative/Platform/Construct. After reading this you might change your mind. Thank you CE and Arjun for the vital post.

A few years ago multiple media outlets began to report a new development designed by a man from Zimbabwe named Sangulani (Maxwell) Chikumbutso, who claimed to have successfully created an electric powered vehicle and system which runs on a battery that has the ability to charge itself, making it the first ever electric vehicle that never needs charging.

According to Maxwell’s claims, the energy to power the battery is taken from electromagnetic waves that exist all around us and are naturally present in our environment. The vehicle had 5 normal gel batteries which were sufficient enough to start the vehicle and charge the batteries, and from there on in, the batteries are constantly charging.

His story and developments began to make noise. For example, SABC News, a major news station owned by the South African Broadcasting Corporation picked up the story and relayed it to their viewers.

According to the Zambian Observer,

“The United States government has given Zimbabwe’s prolific inventor Maxwell Chikumbutso a new home in its populous state of California. Chikumbutso is the founder of Saith Holdings Inc. under which he made headlines for his serial innovations which include the world’s first ever green power generator which can produce electricity using radio frequencies, an electric powered car which doesn’t consume fuel, a fuelled helicopter and many more.”

When this story broke, a number of “fact-checkers” simply labelled it as false without any investigation. When I first saw this I thought to myself, why would multiple media outlets cover the story, film it and present it to the entire country if it was fake? And why did fact checkers simply label the story as false from the armchairs of their offices without providing any evidence showing that it was?

Despite fact-checkers labelling this information as false without any investigation, new energy enthusiasts and makers of one of the most viewed documentaries in human history, THRIVE: What on Earth Will It Take, Foster Gamble and Kimberly Carter Gamble decided to actually go to Zimbabwe and vet the technology for themselves. Since Foster has been looking into and studying new energy technologies for more than 30 years, this was both an exciting moment but one filled with careful consideration, as the vast majority of claims like this are in fact false.

The Thrive team met Maxwell when they landed, and quickly sensed that Maxwell was a good hearted soul who has the desire the change the world. But did his technology truly work? The next morning, Maxwell took them to see a device, which uses the same technology behind the electric car mentioned above. The unit shown in the video clip below is ample enough to power 300 homes, continuously, forever. Likely with maintenance of course. Think about the implications of that…

The full story and more is covered in their new film, Thrive II: This Is What It Takes.  You can see a brief clip from THRIVE II below and Foster and Kimberly’s interaction with Maxwell.STAY AWARESUBSCRIBE TO OUR NEWSLETTER  SUBSCRIBEhttps://www.youtube.com/embed/MHTEmM6rxhQ?start=0&modestbranding=1&showinfo=0&theme=light

In the film, Chikumbutso explains:

One of the painful realities I have seen in energy is this is a very dangerous game all together. Yeah, especially free energy, because you know they can try to kill it – using professional people and that has happened to me…I went through a lot, poisons, like I’m saying right now, I’m fighting it. They come to you then they say, No, you mustn’t do this.” When they see you’re not giving up, then they can just frame you, then they can so no, you’ve done ABC.” My prayer is this thing must see the light of day.

As far as those “fact checkers” go. As I mentioned above they simply labelled this development as false. For example, PolitiFact explained that “Three years ago, a man at a one-day event touted “inventions,” including a car that defies the laws of physics. Since 2015, his story has only found a home on false news blogs and conspiracy sites.”

Snopes did the same, also mentioning our article that was publishing covering the story:

On 25 April 2018, the conspiracy oriented, reality-adjacent website Collective Evolution picked up the story once again, this time citing the aforementioned Zambian Observer story and the 2015 video of that same event from South African television. As is often the case with Collective Evolution articles, the claims made there have been cloned and regurgitated ad infinitum by other dubious clickbait sites.

Again, there is absolutely no evidence or investigation by these fact checkers to vet the technology, and the common theme used to try and debunk Chikumbutso is that his invention breaks the laws of physics, the second law of thermodynamics to be exact, because it produces more energy than is put into the device. They also use ridicule to support their narrative.

We here at Collective Evolution would argue that the device does not at all break the laws of physics, and that the law is not well understood, or needs to be revised. Furthermore, if there’s one thing constant about physics it’s change.

Take, for example, prominent physicist Lord Kelvin, who stated in the year 1900 that, “There is nothing new to be discovered in physics now. All that remains is more and more precise measurement.”

It wasn’t long after this statement when Einstein published his paper on special relativity. Einstein’s theories challenged the accepted framework of knowledge at the time, and forced the scientific community to open up to an alternate view of reality.

It serves as a great example of how concepts that are taken to be absolute truth are susceptible to change. It’s also important to mention that if these fact-checkers actually did some investigation into this case, they would have a different opinion. How come fact checkers have the ability to label something as false without any actual investigation?

That’s why people like Foster and Kimberly are so important.

In fact, there are multiple inventions out there that appear to break the second law of thermodynamics which have received absolutely no attention. For example, renowned inventor and engineer Paramahamsa Tewari developed an electrical generator that put out more power than it takes in, achieving over-unity efficiency. He published a paper in Physics Essays titled “Structural relation between the vacuum space and the electron” in 2018 before he passed. The paper explains the concepts behind the make-up of what we perceive to be our physical material world, the concepts in there explain the the thoughts behind his generator. You can view a video of the generator here, and read more about it in an article I dive deeper about it, here.

Concluding Remarks: The fact that these technologies, and similar technologies that can provide “free energy” to the planet exist is very exciting. We here at Collective Evolution have also had the privilege of seeing some of these technologies with our own eyes, and it’s quite unfortunate that they always come under such a harsh resistance. What does that tell you about our world and the underlying stories that navigate our current thinking? The fact is, new energy technologies like the one mentioned in this article have the ability to completely collapse the biggest energy companies in the world. Just because this is true, does not mean we should not approach the conversation and determine how we can implement them and perhaps create further adjustments in our society along the way.

I started to examine the breakthrough solutions, and much to my surprise, these concepts have been proven in hundreds of laboratories throughout the world, and yet they have no really seen the light of day. If the new energy technologies were to be set free worldwide, the change be profound, it would affect everybody, it would be applicable everywhere. These technologies are absolutely the most important thing that’s happened in the history of the world.  – Dr Brian O’Leary, Former NASA Astronaut and Princeton Physics Professor

Professor Emeritus at the Institute for the Study of Earth, Oceans and Space at the University of New Hampshire. He outlined the importance of these concepts in his paper titled Space and Terrestrial Transportation and Energy Technologies For The 21st Century.

There is significant evidence that scientists since Tesla have known about this energy, but that its existence and potential use has been discouraged and indeed suppressed over the past half century or more.  – Dr. Theodor C. Loder, III (source)

Imagine a planet where we live in transparency and all developments are made public. Why does something that threatens power have to be kept a secret? Why is the excuse always to protect “national security.” Why is our planet like this, and why are we accepting and choosing to live the way we do when we have the potential to do so much better?

Of course, energy is a huge part of our existing economy, and thus it’s easy to see how disrupting energy is disrupting the entire economy. We would lose jobs, industries etc. Our progress as a species is held back by our love affair with our current ways of thinking and economy, even when it creates a world that is slowly destroying itself. So what’s the solution then? Transparent discussion ad a new conversation. We must begin realizing what it is that truly holds back these technologies, and it isn’t as simple as saying ‘the elite’ or ‘the deep state.’ It’s our ways of thinking and being, our collective story.