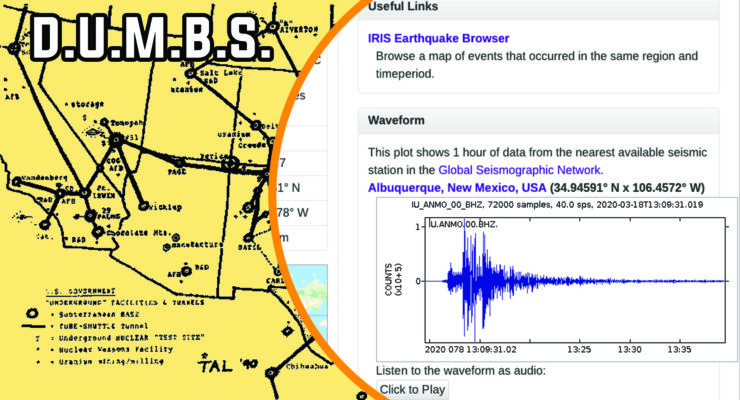 Is this the beginning of the end for the CABAL? We shall soon find out. There may be some misery in store for us surface people to endure for how long is unknown. Has I post this the misery or reset has started. Like they say no pain no gain. I guess the question is how intense will the pain be? Thanks Will and Stillness for this post.

An online researcher claims Deep Underground Military Bases used by the so-called Illuminati or Deep State were recently destroyed using highly advanced technology. What’s even more mindblowing is that he seems to have evidence to back it up.

Legend has it, that victims of human trafficking and other insidious cabal activities take place deep within the earth.

Insiders and researchers say that advanced technology developed in secret, often from recovered extraterrestrial spacecraft, is stored and engineered in these secretive bases. See the book list below.

But according to some in the truth movement and those who research the so-called NWO and Illuminati, an alliance of positive military and even extraterrestrials have taken decisive action against the forces of darkness on earth.

Of course, most people think the idea of DUMBS is a wild conspiracy theory. And even fewer people believe in an alliance working against the Deep State.

But researcher Revan Rising actually has evidence to back up his beliefs.

The evidence is seismology charts that seem to show some kind of unprecedented event has taken place.

Normally, seismographs are used to track earthquakes and volcanic activity.

USGS is a government agency that maintains the network of seismographs across the globe.

These are the instruments that tell scientists the strength of an earthquake. And using triangulation with other seismograph stations, can actually point to where and how deep an earthquake occurred.

This is what a normal earthquake looks like on a graph.

Normal earthquakes tend to last anywhere from 10 to 30 seconds, with a P wave and S wave, depending on where the earthquake took place on the planet in relation to the seismometer.

Artificial earthquakes are produced by manmade activity, such as controlled demolitions of large buildings, or nuclear bomb test. They don’t have the slow buildup of normal earthquakes, as such, they have a sharp spike followed by a rapid decline of motion.

Below is a chart of an event observed by Incorporated Research Institutions for Seismology (IRIS) that they think was a nuclear bomb test carried out by North Korea.

On Feb 12, 2013, a magnitude 5.1 event was recorded in North Korea. Preliminary results suggests that a nuclear test took place.

The team of scientists from IRIS produced an extremely comprehensive report about artificial earthquakes you should read here.

What does this mean?

It means that mainstream scientists already acknowledge that seismographs can be used to detect artificial earthquakes. And that a clear history of what these artificial events look like has already been established.

Translation: this isn’t a conspiracy theory. Scientists use the same methods the researcher Revan Rising used.

Wired Magazine also discussed this in an article here.

This is what the government agency USGS has to say about artificial earthquakes.

How can you tell the difference between an explosion and an earthquake on a seismogram?

Explosions and earthquakes both release a large amount of energy very quickly, and both can be recorded by seismic instruments. However, because the forces involved in each are very different, the waveforms that each creates look different.

Nuclear tests are very near the surface of the earth; all of the energy is released from a small volume surrounding the device. Earthquakes are typically several to many kilometers beneath the surface of the Earth; the energy is released from the fault surface, which can be several to many kilometers long, depending on the size of the fault. The differences in the depth and extent of the energy source produces differences in the waveforms that are recorded on a seismogram.

Lastly, nuclear explosions typically release energy between 2-50 kilotons of yield, compared to, for example, the M6.5 Afghanistan earthquake in May of 1998 that had an equivalent yield of 2,000 kilotons.

Now that you know how to read the seismograph charts, it’s time to review Revan Rising evidence.

The researcher believes in the idea, as was stated earlier, that the Deep State maintains DUMBS, as well as extraterrestrials that also set up DUMBS to observe humanity. And that these bases are being destroyed or attacked through some covert alliance effort.

Massive Undersea base was blown up off the coast of Russia around the region of the Kuril Islands by ET Alliance forces, by the looks of the seismic graph signature. Strong P-waves (bunched up, high velocity compression waves) these type of waves highly present in shockwaves from a explosion.

✳Observation: Strong P-waves are visible in the seismograph at the beginning of the recording then the amplitude suddenly increases into slower S-waves.

Magnitude 7.5, intially it was reported to be 7.8, which is probably the true EQ energy intensity.

According to many researchers and alleged whistleblowers, highly advanced technology allows the military and extraterrestrials to construct bases at extreme depths.

Cheyenne Mountain Complex is only 600 meters below the surface, for comparison.

In a recent live stream from the 19th of March, Revan Rising claims Wilcock confirmed that the Utah earthquake from the 18th was in fact a DUMB being destroyed.

Here’s the chart from the Utah quake.

Is any of this true?

The jury is still out as to whether or not these claims are true.

The government doesn’t acknowledge the existence of DUMBs. There’s no way for researchers such as Revan Rising to go to these locations, deep within the earth, to see if there’s a destroyed based there. But despite the difficulty in proving these claims they have not been disproven as of yet.

What is known is that it appears some earthquakes don’t look normal. They have a signature that looks strikingly like an artificial earthquake, as the researcher showed above using official seismograms.

Assuming these are bases being destroyed, the next question is: by who? And for what purpose?

Of course, one can’t discount the possibility that these are just normal earthquakes. But the fact they match an artificial signature leaves one wondering if there’s something else going on.