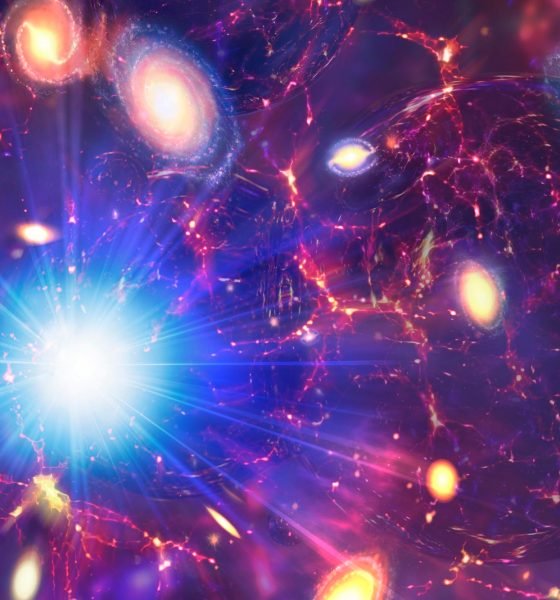 I have run across a few posts that talk about theories of Stargates and how they work. One post stated that each planet has a magnetic thread connected to another planet and so on and that is how a Stargate is used. It’s like a IP address on the internet find that magnetic thread on the gate and you will travel through the wormhole to that destination I wonder if this maybe this type of structure they are talking about? Anyway we have lots to learn from the Ancients they know better than us. Anyway thanks for this post CE

The Facts:A study published in The Astrophysical Journal in October found that hundreds of galaxies were rotating in sync with the motions of galaxies that were tens of millions of light years away. This suggests that an invisible force somehow connects them.

Reflect On:How much of what we know, and what we think we know, is false? Are our minds open to accepting new concepts of reality that don’t fit within the framework of accepted knowledge?

“There is nothing new to be discovered in physics now. All that remains is more and more precise measurement.” This statement was made by Lord Kelvin — a famous Scottish mathematician and physicist who contributed to many branches of physics — in 1900, and shattered only five years later when Einstein published his paper on special relativity. The new theories proposed by Einstein challenged the current framework of understanding, forcing the scientific community to open up to an alternative view of the true nature of our reality. This serves as a great example of how things that are originally taken as truth can suddenly turn out to be fiction.

This type of thing is happening quite often today, and with most of us trying to put food on the table and pay our bills, we don’t really have time to keep up with all that’s being discovered.

When it comes to the connection between all living systems, there are a number of examples one could use from many different fields of study. We see connection in all different forms, including all the way down to smallest bits of matter, the physical ‘stuff’ that our world is made up of. In quantum entanglement, for example, particles remain connected so that if you separate them, regardless of distance, whatever actions are performed on one of them affect the other. This has been seen with photons, for example.

This strange connection is not only seen at the smallest levels of the physical world, but also in large scale. This has been demonstrated by a new study published in the Astrophysical Journal  last October, which found that hundreds of galaxies were rotating in sync with the motions of galaxies that were tens of millions of light years away.

This is a new discovery and a new phenomenon that came from studying 445 galaxies within 400 million light years of our planet. The observed coherence is quite astonishing, and the authors hypothesize that it must have something to do with “large scale structures” that are perhaps connecting them, causing them to move so precisely in sync as they do, especially given the fact that the galaxies observed are separated by approximately 20 million light years. Somehow they “directly interact with each other,” said Joon Hyeop Lee, an astronomer at the Korea Astronomy and Space Science Institute. advertisement – learn more

The paper suggests that the synchronized galaxies are somehow embedded along the same ‘large scale structure,’ which is slowly rotating in a counter-clockwise direction and could be an explanation for the coherence seen between the rotation of these galaxies and their neighbours.

Obviously, a lot is still unknown.

“The dynamical coherence even out to millions of light-years was unexpected and surprising to us, because such distances are obviously too far for neighbor galaxies to directly interact with each other” says Joon Hyeop Lee, first author of the study, from KASI at Daejeon, Korea “Nevertheless, since the observational evidence supports the interaction origin of the dynamical coherence, we could not but think of the possibility that it is the vestige of past interactions.” (source)

These large structures are, as of now, invisible. Astronomers can’t identify what they are, but the discovery hints to the idea that the structures are made predominately of dark matter that links these galaxies in some sort of cosmic web, as galaxies and space in general seem to be dominated by dark matter.

This is where the world of non-material science comes in, as we start to bridge the gap that seems to separate science and metaphysics.

More is unknown than is known. We know how much dark energy there is because we know how it affects the universe’s expansion. Other than that, it is a complete mystery. But it is an important mystery. It turns out that roughly 68% of the universe is dark energy. Dark matter makes up about 27%. The rest – everything on Earth, everything ever observed with all of our instruments, all normal matter – adds up to less than 5% of the universe. Come to think of it, maybe it shouldn’t be called “normal” matter at all, since it is such a small fraction of the universe.

Non-material, invisible substances dominate our world — they are not perceivable to the senses, but they can be detected.

If you’ve looked into dark matter, you may also know that what scientists refer to as the quantum vacuum is often mistaken for dark matter or ‘dark energy,’ but we don’t hear about this in mainstream channels.

Space is actually not empty and it’s full of energy… The energy in space is not trivial, there’s a lot of it and we can actually calculate how much energy there is in that space and that reality might actually come out of it. Everything we see is actually emerging from this space. – Nasim Haramein Stay Aware Subscribe To Our Newsletter

This idea was illustrated decades ago with the “Casimir Effect,” which demonstrates what’s called zero-point energy. Today, we are beginning to see that these concepts are not just theoretical, but instead are very practical. (source)(source) This is why it’s interesting to point out how multiple scientists, over the past little while, have been expressing the idea that what we call “Dark Matter” might actually be mistaken for this ‘zero-point energy.’

When it comes to dark energy, here’s what the paper states:

This is what now is being accepted as the ‘substance’ of space. Space is not empty–if you look at an atom, it’s mostly made up of ’empty space,’ but the space is not actually empty, it’s full of energy.

Nikola Tesla was well aware of this substance/force at the turn of the 20th Century:

All perceptible matter comes from a primary substance, or tenuity beyond conception, filling all space, the akasha, or luminiferous ether, which is acted upon by the life-giving Prana or creative force, calling into existence, in never-ending cycles all things and phenomena.” – Nikola Tesla, Man’s Greatest Achievement, 1907

The late Parahamsa Tewari recently had a paper published in Physics Essays. The paper is titled “Structural Relation Between The Vacuum Space and The Electron.” You can access the full study here. Tewari also points out that dark matter has been mistaken for the ether.

Science still has a long way to go with regards to making discoveries about our universe, as there are many more questions than answers, but something seems to be a common theme, and that’s the fact that invisible forces like dark matter, dark energy, and the zero-point energy field are key components with regards to the structure and nature of reality.

Perhaps the universe itself is conscious?