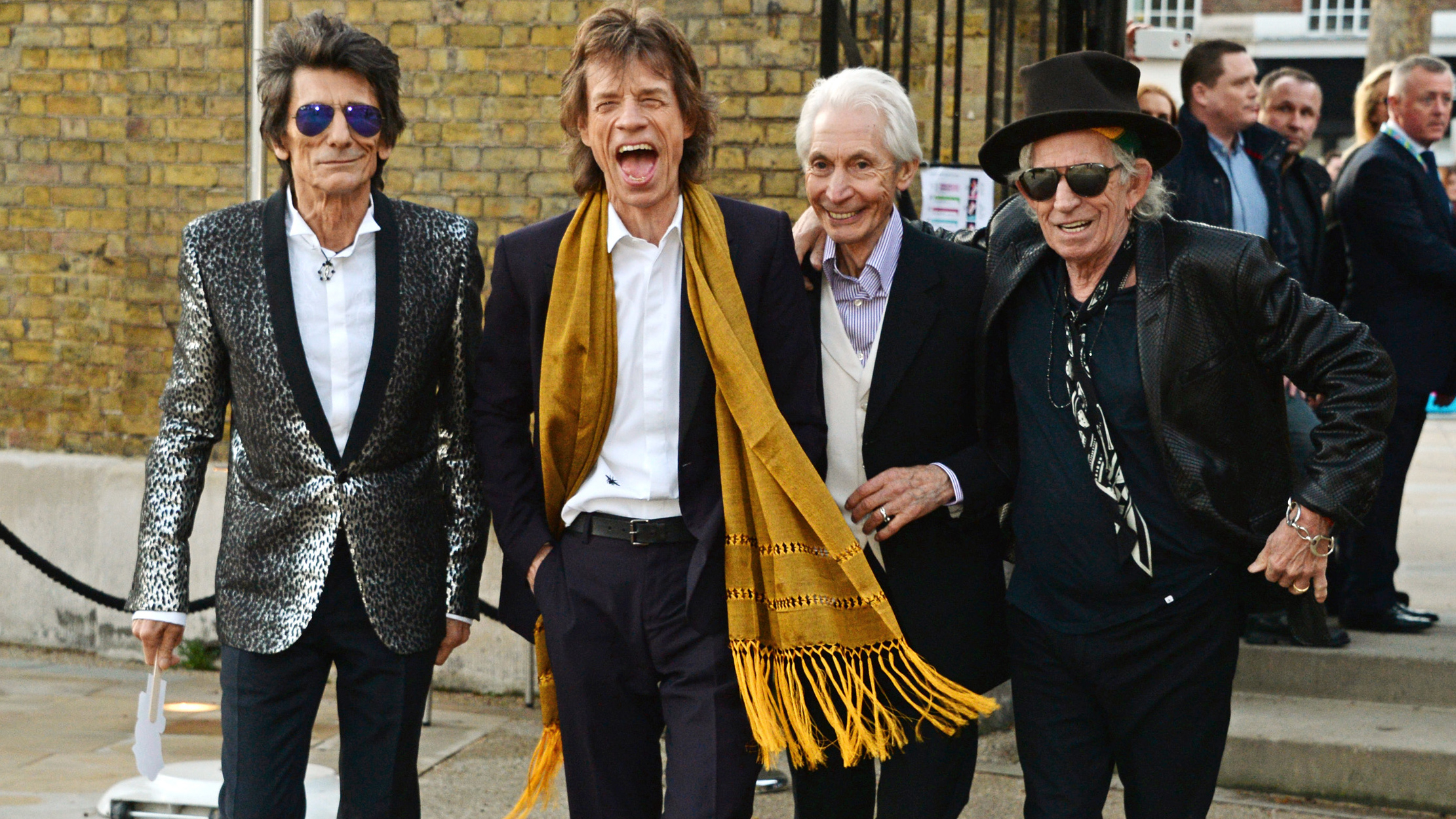 Time doesn’t apply to the Rolling Stones quite like it does to other rock bands. Their longevity is staggering — this band has been around for 55 years. Fifty-five years! Founding members Mick Jagger, Keith Richards, and Charlie Watts have been hitched to each other for far longer than the vast majority of marriages last — longer than a lot of lives last, too.

That staying power is an incredible achievement, and it also has a distorting effect. If you’re a fan of the Stones, it’s hard not to always compare them with their glorious 1968 to 1972 peak, when they fully assimilated all their blues, rock-and-roll, R&B, and country influences and turned it into something decadent, dark, ironic, sexy, and wholly their own. That leaves 45 ensuing years of gradually declining cultural relevance and, if we’re being honest, more mediocre music than good, and a seemingly ceaseless parade of product — compilation albums, concert films, live albums, and, recently, the traveling “Exhibitionism” display of band memorabilia. In 2017, it seems equally reasonable to think of the Rolling Stones as rock gods or greedy dinosaurs. Either characterization, though, is inadequate.

In all likelihood, the band’s most recent studio album, the all-blues cover effort Blue & Lonesome, is going to be its last. It’d been 11 years since the previous one, and Mick, Keith, and Charlie are north of 70 years old. Guitarist Ronnie Wood, who joined up in 1976, is the youngster at 69. At some point, time is going to do to them what time always does. Before that though, let’s try and take account of what the Rolling Stones have achieved since they set out from London in 1962. As the following 373 songs attest, it’s been an improbably long, wildly lucrative, bumpy, and very often brilliant rock-and-roll life.

Some general notes before we start:

— Keith Richards is the Rolling Stone everyone loves, the one with whom you could imagine sharing a beer. Mick, not so much. If Jagger were even to deign to have a drink with a plebe, I suspect it’d entail something like his sipping a Peter Thiel vampire smoothie while peering at you through jeweled binoculars and having a Slovenian model smooth anti-aging unguents into his wrinkles. In other words, he’s not cool and Keith is. The problem with that dynamic is that it diminishes Mick’s contribution. A great Rolling Stones song, unlike a great Beatles song or a great Led Zeppelin song, is the result of the band’s leaders working at a peak at the same time. Keith Richards knocks out solid melodies and guitar riffs like the rest of us breathe. (Charlie Watts’s drumming is just as consistent.) So what really separates apex Stones from good Stones, and good Stones from bad Stones is Mick Jagger matching Keith’s excellence. When his singing is engaged and his lyrics have purpose, the results are strong. When he doesn’t, there’s not much Keith can do to help. Keith is the constant; Mick is the variable. (Mick was also the one who pushed the band toward new sounds and styles. Was he a trend chaser? Yes, but he often caught worthwhile sounds.) Get unlimited access to Vulture and everything else New York LEARN MORE »

— We think of the Rolling Stones as a blues-rock band. Over its six-decade existence, though, the outfit has had several distinct musical periods. From 1962 to 1965, the band — Mick, Keith, Charlie, bassist Bill Wyman, and guitarist Brian Jones, who, along with manager-producer Andrew Loog Oldham, was an important driving force in the early days — was, by design, derivative of its musical heroes. This period includes a lot of music that, to my ears, doesn’t hold up today. When you can easily stream a Muddy Waters or Howlin’ Wolf original, the baby Stones’ covers of mid-century blues material become less enticing. The real thing is right there waiting for you. The band didn’t put out a fully absorbing album till the second half of 1965, not coincidentally when Jagger and Richards started to consistently generate original material.

— The band’s less blues-oriented material from 1966 and 1967 constitutes a minor peak. These guys were very good at writing and recording pop songs! Unique ones, too. The Stones’ sound during this mini-era was pop with punkish, at times almost metallic touches, adorned with Brian Jones’s (then at his creative peak) distinctive instrumental textures — textures lost when his time in the band was up. And once the Stones started down the heavier, harder rocking road, they never really returned to the playful, exuberant atmosphere of albums like Between the Buttons.

— The ’80s weren’t as creatively bad for the Stones as is commonly thought. Mick may have been pandering to glossy production trends in search of a hit, but the material on 1986’s often-maligned Dirty Work, for example, is stronger than the more conventional Stones-isms of better known ’70s albums like It’s Only Rock ‘n Roll. If you’re not married to a singular idea of how the band should sound, the ’80s Stones have a lot to offer. Once you get to the ’90s though, the best you can do is to cherry-pick the good songs; the albums become interchangeable, marred by musical and lyrical clichés.

— The Rolling Stones have multiple songs that are lyrically reprehensible to women and people of color — often both at the same time. If I were questioned about this topic at the Pearly Gates, I’d suggest that the Stones’ offensive attitudes had more to do with a craven desire to be provocative than any fundamental malignant worldview, but maybe I’m a fool. Whatever the true motivation behind them, a handful of the band’s songs have been tarred by Jagger and Richards’s sex and race insensitivity. There’s no getting around it. Then there’s the matter of appropriation. Excepting perhaps Elvis, there is no rock act that benefited more from drawing on black music than the Rolling Stones, who have repeatedly talked with respect and deference about how much they’ve taken from their musical idols. I do think that once the band took flight, its music represents a synthesis of their influences, rather than mere mimicry or theft. That said, I don’t know what you do with all these issues other than acknowledge that they’re a problem. Whether that problem is an aesthetically and/or ethically insurmountable one is up to you. (Perhaps comparison with the other great superstar English blues-appropriators Led Zeppelin is helpful here: The Stones weren’t nearly as blasé about stealing songwriting credits and far more diligent about helping their heroes gain wider exposure.)

— This ranking includes covers recorded by the band as well as original compositions. In both instances, I used the earliest album or EP appearance of a given song as the basis for the ranking. (A lot of Stones songs, especially in the very early days, showed up on multiple albums; there’s also a lot of material included on more than one live album.) I didn’t include songs that were only available unofficially. (So no “Cocksucker Blues.”) There are two legitimately released sources of material I discounted. Checkerboard Lounge: Live Chicago 1981 is co-credited to Muddy Waters and the Rolling Stones. It’s not a Rolling Stones album. It’s a Muddy Waters album on which different members of the Stones appear at different times. Similarly, there are two songs on the L.A. Friday live recording where Billy Preston sings his own songs while backed by the Stones. Those are Billy Preston performances, not Rolling Stones performances. In both cases to include them in this ranking would’ve felt misleading