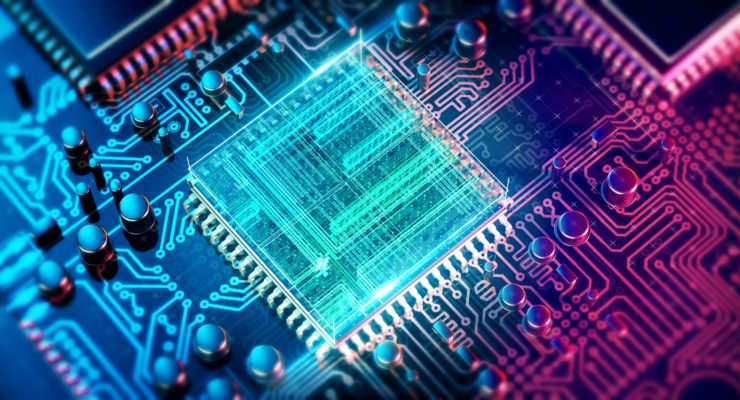 (Alanna Ketler) Information has officially between teleported between two physical chips for the first time. How will this new discovery affect how we receive and send information? Is this just the tip of the iceberg that could eventually lead towards teleportation of physical objects?

Recently scientists from the University of Bristol and the Technical University of Denmark have achieved something straight out of a ‘futuristic’ sci-fi movie – they have achieved quantum teleportation between 2 computer chips for the first time, ever. (Source)

The team was able to send information instantly from one chip to another without them being connected physically or via WiFi or Bluetooth, this opens the door for something called quantum computers and quantum internet. So, how did they do it you may ask?

This phenomenon involves two particles becoming intertwined so that they are able to communicate over very long distances. If the property of one particle is changed it will instantly cause the other particle to change as well regardless of how much distance is between them. There is no limit to the amount of space between the two particles, which baffles many scientists including the late, great Albert Einstein himself, who called this whole thing, “spooky action at a distance.”

Being able to grasp and utilize this type of science could provide many benefits for humanity. You may have heard of how the act of observation can change how particles react, this is exactly what the scientists involved in the study did. They generated pairs of entangled photons on chips and made a measurement of one, this changes the state of the photon which is instantly applied to the other photon on the other chip.

“We were able to demonstrate a high-quality entanglement link across two chips in the lab, where photons on either chip share a single quantum state,” says Dan Llewellyn, co-author of the study. “Each chip was then fully programmed to perform a range of demonstrations which utilize the entanglement. The flagship demonstration was a two-chip teleportation experiment, whereby the individual quantum state of a particle is transmitted across the two chips after a quantum measurement is performed. This measurement utilizes the strange behavior of quantum physics, which simultaneously collapses the entanglement link and transfers the particle state to another particle already on the receiver chip.”

The team was able to report a 91 percent success rate of teleportation between two chips.

The study reports, “the demonstration of chip-to-chip quantum teleportation and genuine multipartite entanglement, the core functionalities in quantum technologies, on silicon-photonic circuitry. Four single photons with high purity and indistinguishability are produced in an array of microresonator sources, without requiring any spectral filtering. Up to four qubits are processed in a reprogrammable linear-optic quantum circuit that facilitates Bell projection and fusion operation. The generation, processing, transceiving and measurement of multi-photon multi-qubit states are all achieved in micrometre-scale silicon chips, fabricated by the complementary metal–oxide–semiconductor process. Our work lays the groundwork for large-scale integrated photonic quantum technologies for communications and computations.”

This new research is important as quantum computers, internet and other technologies rely on quantum information, Llewellyn said.

‘This is encoded in single particles that are difficult to control and measure’.

Spooky Action At A Distance

If you are maybe a little confused about what this all really means the following video does an excellent job at breaking it down in layman’s terms and might help you understand why this new feat is so extraordinary.

It’s difficult to comprehend the scope of what this recent discovery could represent for us, but it seems it will make a lot of our current methods of sharing information a lot more efficient.

If information can be teleported between chips, will physical objects also be able to be teleported one day? If particles are just tiny bits of electronic information anyways, this seemingly far-fetched idea may be closer than we think. Quantum physics sure is a fascinating science and advancements are being made every single day! Hold on everyone, things are really starting to ramp up!