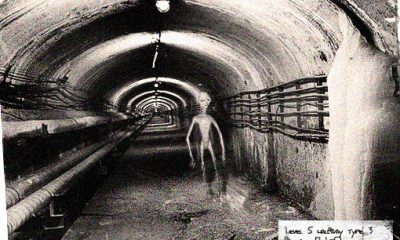 The U.S. Government classifies over 500 million pages of documents each year, offering little transparency to the public. How can we know anything about what is happening on our planet if so much information is kept hidden from us?advertisement – learn more

“According to our best estimates, more than half of all U.S. government records are classified. For an archivist seeking to preserve and understand our history, that means most of our history is kept secret from us, think about that for a moment ”

The United States has a history of harbouring secret government agencies. While the National Security Agency (NSA) was founded in 1952, for instance, its existence was hidden until the mid 1960s. Even more secretive is the National Reconnaissance Office, which was founded in 1960 but remained concealed for 30 years.

Recent leaks from Edward Snowden, a former intelligence contractor, have shed light on the Black Budget world, which is full of Special Access Programs (SAP) and garners trillions of dollars every year to conduct operations the general public knows nothing about (2). These programs do not exist publicly, but they do indeed exist. They are better known as ‘Deep Black programs.’ A 1997 US Senate report described them as “so sensitive that they are exempt from standard reporting requirements to the Congress.” One aspect of these programs is the development of deep underground military bases, which can exist up to several miles underneath the surface.

Known underground facilities also exist. Take, for example, the Swedish underground military facility at  Musko. It’s a large naval base built underneath a mountain. The hospital alone within this facility holds over 1,000 beds. Musko engineers blasted out 1,500,000 cubic meters of stone in order to build it (4)(5).advertisement – learn more

“The military utility for underground construction is obvious. I recall years ago studying the matter in the context of American Cold War military strategy. during the 1950’s, motivated by a fear of Soviet missiles striking American installations and cities, military planners recognized the value of secure facilities deep underground.”

In 1987, Deputy Director of Engineering and Construction for the U.S. Army Corps of Engineers Lloyd A. Duscha gave a speech at an engineering conference titled “Underground Facilities for Defense – Experience and Lessons.” In the first paragraph of his speech he reveals:

After World War II, political and economic factors changed the underground construction picture and caused a renewed interest to “think underground.” As a result of this interest, the Corps of Engineers became involved in the design and construction of some very complex and interesting military projects. Although the conference program indicates the topic to be “Underground Facilities for Defense – Experience and Lessons,” I must deviate a little because several of the most interesting facilities that have been designed and constructed by the Corps are classified. (4)(6)

He then went on to discuss the Corps’ involvement in the construction of the large and elaborate NORAD base in the 1960s, buried deep beneath Cheyenne Mountain, in Colorado. This is just a public statement, but you will not find a more significant public admission of secret underground bases than this one.

There are, however, actual documents that have been obtained by researchers through the Freedom of Information Act (FOIA) that shed more light on the subject, and clearly outline plans for underground facilities. (4)

There are documents available that expose a deep underground command center that was to be built far below areas such as Washington, D.C., and China Lake, California, during the Cold War. Documents show that in 1964 the military was considering building a huge underground cavity 4,000 feet deep beneath China Lake (4). It’s well known that the United States and the Soviet Union created a vast infrastructure to support a complex of offensive and defensive weapons during the Cold War. This infrastructure included sites and facilities for developing, testing, storing, and manufacturing weapons. There were also a host of communication and command centers. (7)

The world’s most prominent researcher on underground military facilities, Richard Sauder, Ph.D, told of an interesting story in his book Hidden In Plain Sight (4) that I’d like to share with you:

As it happens, after giving a public talk a couple of years ago, I was approached by a man who had been a uniformed member of the United States Navy. We chatted for a while and when he mentioned that he had spent some time at China Lake my ears perked up. I asked him if there was an underground facility at China Lake. He said that indeed there is, and that it is impressively large and deep. I asked him if he had ever been in it, and he said that he had, though not to the deepest levels. I asked him how deep the deepest part extended. He looked at me soberly and said very quietly, “It goes one mile deep.” I then asked him what the underground base contains. He replied, “Weapons.” I responded, “What sort of weaponry?” And he answered without pausing, “Weapons more powerful than nuclear weapons.” (4)

The very first top secret memo on the subject was issued by Robert McNamara on November 7th, 1963, from the office of the Secretary of Defense. This took place right before the Kennedy murder (4).

In this memo McNamara discusses the National Underground Command Center. The memo was addressed to McGeorge Bundy, Kermit Gordon, and Dr. Jerome Wiesner. Bundy was the special assistant for National Security Affairs for President Kennedy. Gordon was the Director of the Bureau of the Budget and Wiesner was Kennedy’s science adviser. McNamara stated that they would meet sometime during the end of November, but Kennedy had already been murdered by then.

A second memo was issued on the same day concerning a proposed Deep Underground National Command Center that would be approximately 3,500 feet underneath Washington. (4) The memo also mentioned elevator shafts below the State Department and White House that would descend to 3,500 feet with high speed, horizontal tunnel transport to the main facility — impressive technology for the 1960s.

“There is little threat of opposing a secret society by imitating its arbitrary restrictions. Even today, there is little value in insuring the future of our nation if our traditions do not survive with it and there is great danger that an announced need for increased security will be seized upon by those anxious to expand its meaning to the very limits of official censorship and concealment – that I do not intend to allow to permit to the extent that it is in my control. For we are opposed around the world by a monolithic and ruthless conspiracy that relies primarily on covert means for expanding its sphere of influence — on infiltration instead of invasion — on subversion instead of elections — on intimidation instead of free choice — on guerrillas by night instead of armies by day. It is a system which has conscripted vast human and material resources into the building of a tightly-knit, highly efficient machine that combines military, diplomatic, intelligence, economic, scientific and political operations. Its preparations are concealed not published. Its mistakes are buried, not headlined. Its dissenters are silenced, not praised. No expenditure is questioned, no rumor is printed, no secret is revealed”

The reality of Deep Underground Military Bases is extremely fascinating. There is an enormous amount of evidence that proves their existence. Secret military bases used to be considered a conspiracy theory, but not long ago, the Department of Defense officially declassified the existence of Area 51. (8)

There are hundreds of military bases, and underground military bases spread all over the world. Dr. Richard Sauder documents this phenomenon well in Hidden In Plain Sight, and in his other works. What I’ve provided above barely even scratches the surface of this issue. In his book he goes on to describe the technology behind such developments, under-ocean bases, and more. This is a fascinating topic to explore, and the next question to ask is, what goes on in underground military facilities?

We know that the military operates at these defense installations, and it’s safe to assume that a number of classified projects go on within them, and this includes UFO and extraterrestrial research.

Bestselling British author and researcher Timothy Good has written several books dealing with the question of possible extraterrestrial interaction with Earth. Another person who comes to mind is historian and UFO researcher Richard Dolan. In their books, both have hinted at having been privy to some very interesting information related to this subject.

In After Disclsoure, Dolan shares an experience he had with a politician who was deep underground in a military base.. He was briefed on the extraterrestrial reality and said that ETs and UFOs are just the tip of the iceberg when it comes to information that’s concealed from the public (1).

I’ve had two personal encounters with Canadian military personnel. One of them was with a coastguard veteran, who personally told me that if I would like to know about extraterrestrials, I should join them. “Come work for us and you can ask them yourself,” he said. This is something I’ll remember for my entire life.

The second one was bizarre. I met a senior Canadian Air Force officer, had a short conversation with him, and brought up UFOs. He instantly turned around and started walking away from me. About an hour later, in a completely different location, he walked right by me, accompanied by what looked like bodyguards, and didn’t even look at me.

Below is a video of Phil Schneider. Much of what he says with regards to methods of underground base development correlates with the research I’ve done. He was murdered shortly after giving a few lectures like the one below.

Deep Underground Military Facilities are not a conspiracy. What happens beneath our feet uses trillions of dollars from the Black Budget for special projects that the majority of the human race knows nothing about.