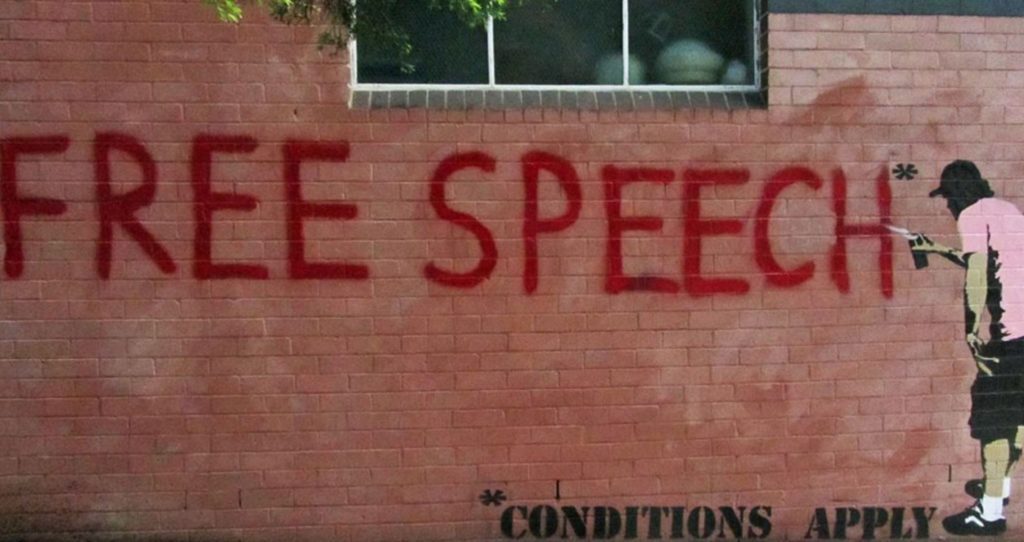 You don’t have to look far to find clear manifestations of the current degradation of our basic natural right previously known as free speech—now hate speech (you can start here, here, here, here, and here). There’s a cultural shift taking place towards the social control of thought and reasoning under the guise of love and compassion. Ironically, and quite pathetically, the so-called resistance to “hate speech” in the name of “tolerance” has become nothing more than a license to hate.

This behavior and philosophy appears to find refuge in the media and now within political platforms. It has become the norm on some college campuses to facilitate and foster such a dangerous and toxic culture.

Ultimately and arrogantly, this has been done to suppress and diminish thoughts and perspectives that are simply deemed offensive or inferior to those who believe themselves to be arbiters of truth and tolerance.

You could ask, as I have, how this blatant and pitiful behavior can so easily take on the mask of—and be accepted as—peacekeeping and productivity.

There are most likely quite a few things that factor into this regression of civility. However, could the root of this social malfunction be found in the inherent arrogance of tolerance, to begin with? Whether through apathy or fear of finding truth itself, has the reliance on the illusion of tolerance caused us to lose sight of the true purpose of free speech?

The following are snippets of the wisdom found therein:

The Arrogance of Tolerance

“It is made to appear that, whereas each man claims his freedom as a matter of right, the freedom he accords to other men is a matter of toleration. Thus, the defense of freedom of opinion tends to rest not on its substantial, beneficial, and indispensable consequences, but on a somewhat eccentric, a rather vaguely benevolent, attachment to an abstraction.”

“So, if this is the best that can be said for liberty of opinion, that a man must tolerate his opponents because everyone has a ‘right’ to say what he pleases, then we shall find that liberty of opinion is a luxury, safe only in pleasant times when men can be tolerant because they are not deeply and vitally concerned.”

“We take, it seems to me, a naively self-righteous view when we argue as if the right of our opponents to speak were something that we protect because we are magnanimous, noble, and unselfish.” [emphasis added]

The True Value of Free Speech

“…if we truly wish to understand why freedom is necessary in a civilized society, we must begin by realizing that, because freedom of discussion improves our own opinions, the liberties of other men are our own vital necessity.”

“We must insist that free oratory is only the beginning of free speech; it is not the end, but a means to an end. The end is to find the truth.”

Opposition Is the Key to Progression

With what appears to be a consistent departure in our culture from the wisdom that the freedom of speech is founded on, The Indispensable Opposition provides the clear and sufficient reminder we need. The significance of freedom of speech as an unalienable right and its requisite perseveration are vital to our individual progress and progress as a human family.

Download Your First Issue Free!
Do You Want to Learn How to Become Financially Independent, Make a Living Without a Traditional Job & Finally Live Free?

We simply cannot come to know truth without any opposition to prove it. The freedom of conscience and speech provide the marketplace of ideas and thought in order for us to reason and be edified together freely.

It’s a simple yet divine process in which opposing views and perspectives continuously provide and receive a pressure-test for truth, catalyzing our collective progress. It’s a simple free-market mechanism.

Falling back on tolerance as an excuse to avoid such pressure divides, represses, and constrains this process and its participants. Subverting the influence of opposition under its guise, whether by intention or apathy, will deteriorate our primary path to truth.

…truth is great and will prevail if left to herself, that she is the proper and sufficient antagonist to error, and has nothing to fear from the conflict, unless by human interposition disarmed of her natural weapons, free argument and debate…

This higher level of respect and comprehension does not mean we need to accept or believe everything we are confronted with, as this, too, would be an obstacle to our progression.

However, there’s truth to be learned or more firmly established even when we listen to those who clearly manifest a misunderstanding of a subject or intend to disseminate falsehoods; we are able to expose our own ideas to them in contrast to more fully comprehend the truth of the given subject.

The Instability of Tolerance

Tolerance is subjective and relative to the circumstances of the agents involved in whatever situation has requested it. However, the right, mechanics, and application of free speech are absolute, objective to any present truth for those who seek it.

Boyd K. Packer, President of the Quorum of the Twelve Apostles of The Church of Jesus Christ of Latter-day Saints, emphasized this, stating:

The word tolerance does not stand alone. It requires an object and a response to qualify it as a virtue… Tolerance is often demanded but seldom returned. Beware of the word tolerance. It is a very unstable virtue.

We must make the personal effort and conviction to participate in and protect the most effective finite structure we have for finding truth. We cannot become complacent with such an endeavor and rely on the ambiguous and precariously arbitrary excuse called tolerance to justify our failure to do so.

These necessary efforts can be derailed by our own bias, which is simply upheld by our desire to satisfy our pride in response to some fear. This can arise in an attempt to avoid retribution from those who desire to control through force, intimidation, or contempt. More often, though, it’s simply a fear of being wrong and the need to accept correction, which now tends to translate to one being offended and violated.

Regardless of how pitifully offended the culture becomes towards the basic premise of free speech with their blatant depreciation of its value for a free society, there’s a more divine level of understanding each of us must extract and employ from this unalienable right that we have been endowed with from our Creator.

Those who fervently uphold the true purpose of free speech manifest genuine objectivity to truth and the desire to find it. These are they who will spearhead the world to prosperity.

“Until we have thoroughly understood this principle, we shall not know why we must value our liberty, or how we can protect and develop it.” – Walter Lippmann