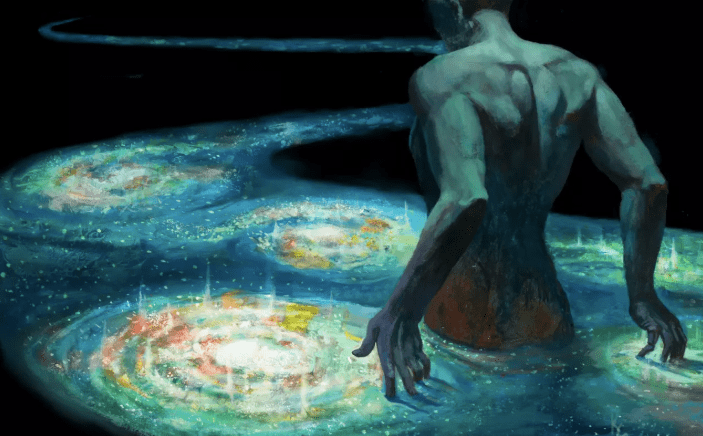 Thanks ARJUN and CE for bringing this post to our attention it is much needed has we move towards who we are and were it all began. Great artwork Kenny

The true origins of human history remain a mystery, but that’s not what mainstream academia would have us believe. Since Darwin, human evolution and ‘the survival of the fittest’ has been pushed on the population as some sort of scientific truth, despite the fact that it remains a theory with multiple loopholes and ‘missing links.’ If you question it, in some circumstances, you are almost considered a nut.

This continues to happen in many different fields of knowledge; when you question beliefs that have been ingrained for so long you get a harsh response, and in some cases, you’re liable to be fined, put in jail or at the very least you receive tremendous amounts of hate and censorship.  What we don’t hear about is the fact that there are several hundred scientists, if not several thousand, who have spoken up against the scientific validity of the theory of evolution.  I recently wrote an article about more than 500 scientists coming together to reject Darwin’s theory of evolution and explain why it’s not really valid at all.

Our DNA Originated Somewhere Else

Even one of the founding fathers of DNA, Francis Crick, believed that human DNA must have originated from somewhere else in the galaxy, whereby “organisms were deliberately transmitted to earth by intelligent beings on another planet.” You can read more about that here. I also recently wrote about a paper that was published by 33 scientists in the Progress in Biophysics and Molecular Biology Journal suggesting that the flourishing life during the Cambrian era (Cambrian Explosion) originated from the stars.

“With the rapidly increasing number of exoplanets that have been discovered in the habitable zones of long-lived red dwarf stars (Gillon et al., 2016), the prospects for genetic exchanges between life-bearing Earth-like planets cannot be ignored. ” (The study)

There is a great little blurb from Cosmos Magazine, one of the few outlets who is talking about the study.

Serious inquiry into the origins of human history are not encouraged in the mainstream. Yet as we dig a little on what’s being done, there is a lot to find out, with new theories and discoveries that seem to be popping up every single year.  Modern day education is hardly keeping up with this, and in fact continues to promulgate old theories and notions that have long been disproven. As a result, nobody beyond ardent self-motivated researchers are learning about new developments or have any knowledge of these viewpoints.

The suppression of the discoveries of giant humanoid skeletons falls directly into this category, though the secrecy that wraps up the Smithsonian is a topic for another article. Suffice it to say that successful cover-ups of information are possible in part due to the phenomenon of ‘cognitive dissonance’, which speaks to the extreme discomfort that a piece of information that disrupts the worldview you grew up with can have on you. Many of us have and do experience this, including myself. In today’s day and age, it’s important to practice overcoming the discomfort to keep an open mind.

Consider entertaining new ideas without necessarily accepting them, just give them a chance to swirl in your mind a bit. With new information constantly emerging at a rapid pace in all fields, an open mind is what serves us best. If we stay closed and refuse to even look at or acknowledge evidence that contradicts what we believe, we will never advance towards actual truth, and simply be caught up in an agnostic state while never really getting to the bottom of the questions that are naturally on our mind.

The StarGate program was co-founded by Russell Targ (watch his banned TED talk about ESP here), Hal Puthoff, who is now a member of the ‘To The Stars Academy’ with Tom Delonge, and other notable names who have worked on Deep Black Budget programs within the U.S. government. They are currently spearheading an effort to let the American public know that UFOs are real and that there is sufficient evidence to suggest that, as Louis Elizondo says, “we are not alone, whatever that means.”

The StarGate program investigated parapsychological phenomenon like remote viewing, telepathy, telekinesis, and clairvoyance. The program yielded high statistically significant results and was used multiple times for intelligence gathering purposes. A lot of interesting information came out of the literature that was declassified in 1995 after the program ran for more than two decades.

It was a complete mystery why the program was shut down: remote viewing, for example, which is the ability to describe the physical characteristics at a given location irrespective of distance, was found to be repeatable, even more than findings in the hard sciences, with a success rate of over 80 percent. Remote viewing was how the rings around Jupiter were actually discovered by Ingo Swann before NASA was able to measure them. You can read more about that here.

To summarize, over the years, the back-and-forth criticism of protocols, refinement of methods and successful replication of this type of remote viewing in independent laboratories has yielded considerable scientific evidence for the reality of the [remote viewing] phenomenon. Adding to the strength of these results was the discovery that a growing number of individuals could be found to demonstrate high-quality remote viewing, often to their own surprise. . . . The development of this capability at SRI has evolved to the point where visiting CIA personnel with no previous exposure to such concepts have performed well under controlled laboratory conditions.” (source)

The Breadth Of Remote Viewing

There are examples in the literature, from remote viewers looking at classified Russian technology during the cold-war era, locating a lost spy plane in Africa and the prediction of future events. Yes, along with remote viewing comes the ability to view into the past, and view into the future. Obviously, this gets tricky, especially if we look at quantum physics, which works in tandem with parapsychology. In quantum physics, experiments have also shown how what happened in the past can change the future, and what happens in the future can change the past, on a quantum scale. You can read more about that here.

There were multiple people working within the Remote Viewing Program, which was conducted at Stanford Research Institute (SRI) in conjunction with multiple intelligence agencies, and one of them was Joseph Mcmoneagle. Many of these people, after decades in the program, continued on with their research and experimentation long after the program was declassified. Joseph was one of the most successful Army-trained remote viewers, and one of the original members of project Stargate. He was actually awarded the Legion of Merit for “producing crucial and vital intelligence unavailable from any other source” to the intelligence community.

The Origins Of Humanity

In 1983, McMoneagle worked with Robert A. Monroe, founder of the Monroe Institute in Faber, Virginia, which provided basic out-of-body orientation for many of the military remote viewers. There, he conducted a session seeking to discover the origin of humanity. As the late great author and researcher Jim Marrs points out in his best selling book Our Occulted History points out:

During the 129-minute session, he described a shoreline on what appeared to him to be a primitive Earth. He later estimated a time of about thirty million to fifty million years after the time of the dinosaurs. Cavorting on this shoreline was a large family of protohumans-hairy animals about four feet in height, walking upright and possessing eyes exhibiting a spark of intelligence despite a somewhat smaller cranial capacity. Two things surprised McMoneagle in this session. These creatures appeared to be aware of his psychic presence, and they did not originate at that location.

McMoneagle described his experience in his 1998 book, The Ultimate Time Machine:

This particular species of animal is put…specifically in that barrier place…called the meeting of the land and the sea…I also get the impression that they’re…ah…they were put there. They mysteriously appeared. They are not descended from an earlier species, they were put there (by a) seed ship…no, that’s not right. Keep wanting to say ship, but it’s not a ship. I keep seeing a…myself…I keep seeing…oh, hell, for lack of a better word, let’s call it a laboratory, where they are actually inventing these creatures. They are actually constructing animals from genes. Why would they be doing that? Can we do this yet…here and now? Like cutting up genes and then pasting them back together. You know, sort of like splicing plants…or grafting them, one to another…Interesting, it’s like they are building eggs by injecting stuff into them with a mixture of DNA or gene parts of pieces.

He described these creatures as delicate-looking aquiline-featured humanoids, unclothed, in possession of a prehensile tail and large “doe-like” eyes. They seemed to be using some sort of light that McMoneagle had a hard time describing, but eventually described it as a “grow light.”

Marrs got the impression that it was like someone tending to a garden, and planting seeds, but “there isn’t any concern about the seeds after they are planted…It’s simply like…well…put these seeds here and on to better and bigger business. No concern about backtracking and checking on the condition of the seeds. They can live or die, survive or perish.” The session ended with him moving closer in time and perceiving these beings growing in size and ability, eventually becoming herding humans.

The surveillance of and interference with humanity is documented in the lore of almost all civilizations that have roamed the planet. Although some have called this mere ‘interpretation,’ it reminds me of people referring to the confirmation of spiritual and metaphysical realms as a result of quantum physics. It is simply labelled as an interpretation due to the fact that it upsets so many belief systems and long-held preconceived ideas.

The story of human history has a lot of holes. From the UFO extraterrestrial phenomena to the discovery of strange skeletal remains, to the rejection of Darwinism all the way to the existence of intelligence ancient civilizations like Atlantis, and others that thrived possibly millions of years ago, we are like, as author Graham Hancock coined, a species with amnesia. But perhaps we are starting to remember. Perhaps our only two explanations are incorrect, or perhaps they’re both correct, combined with other factors. The point is, what we’ve been told is not true, and the recognition of that fact will lead us on the path towards true discovery, and away from the concealment and manipulation of information and truth.

I’m not saying this is how humans are created, perhaps it is just some sort of glimpse into something much bigger that took place billions of years ago?