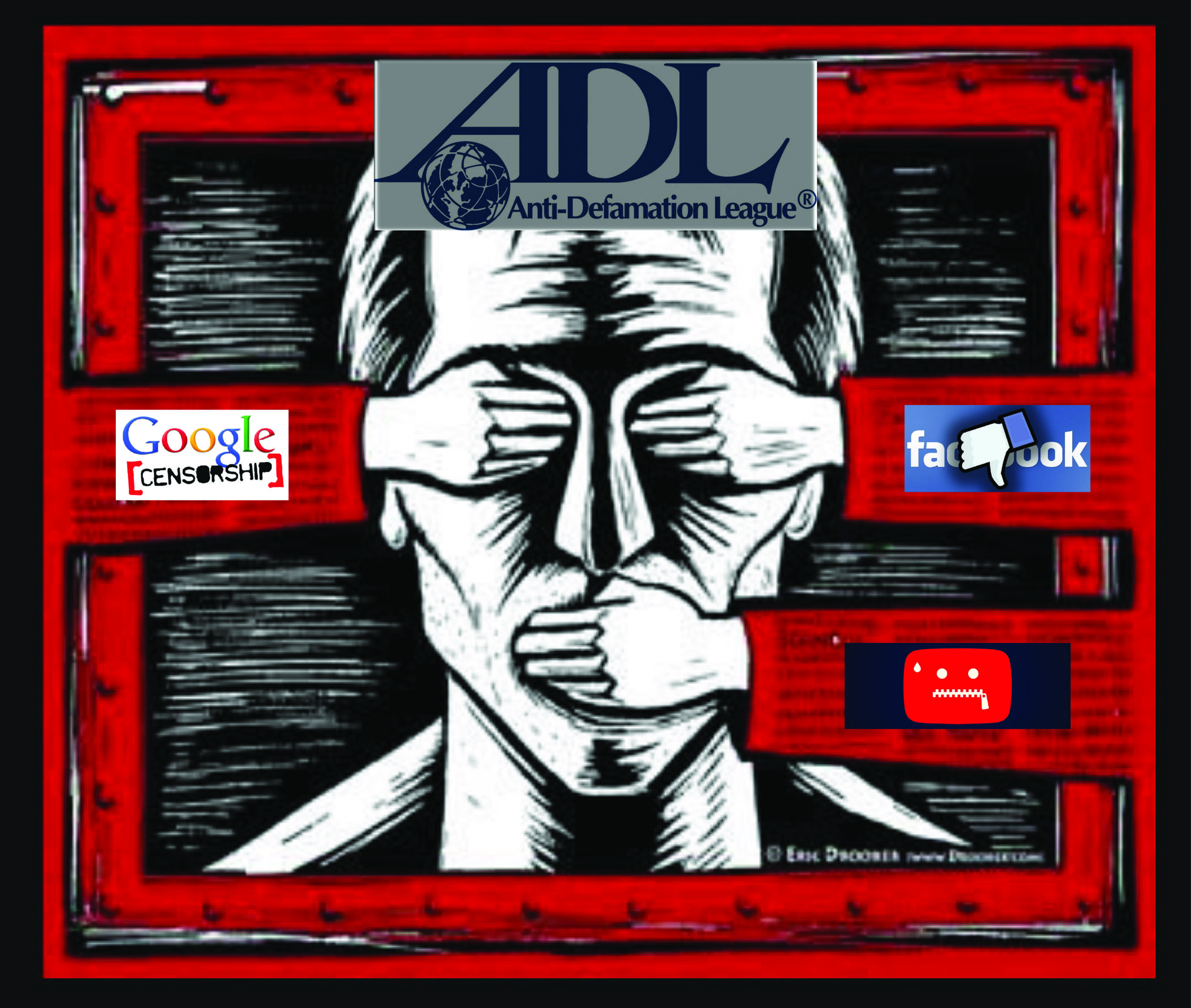 The Anti-Defamation League is joining with Facebook, Google and others to further attempt to ‘curb hate speech and abuse’ on the internet.
Reflect On:

Are these companies running the risk of awakening more people to their thinly-veiled attempts to censor internet content that goes against their preferred narrative?

If you are reading this, that means that articles that speak against the activities of the Anti-Defamation League are not being automatically scrubbed from the internet.
advertisement – learn more

In a foreboding sign that the free expression of opinion on the internet is too much of a threat to the powerful elite of our society, the Anti-Defamation League is leading the charge in turning their own subjective opinions on ‘hate speech’ into the absolute rule of Internet law. As this Cnet article reports,

Facebook, Twitter, Google and Microsoft, among others, are joining with the ADL to form a Cyberhate Problem-Solving Lab, the companies and the civil rights group said Tuesday. They’ll exchange ideas and develop strategies to try to curb hate speech and abuse on the companies’ various platforms and across the internet.

“These companies have an added responsibility to do everything within their power to stop hate from flourishing on their watch,” ADL CEO Jonathan Greenblatt said in a statement. “We look forward to tackling this pressing challenge together.”

Like Monika Bickert, Facebook’s head of global policy, who said in a statement that “some of the best minds in engineering will work alongside the ADL to help us rise to the occasion.” What occasion? The threat of the power that the proliferation of free speech on the internet is giving to individual human beings fighting for truth and justice.
Who Died And Made Them King?

It is disconcerting to me that we are moving into a time where a once free and neutral internet has suddenly come more and more under the control of powerful dictatorial forces. Yes, dictatorial. The ADL is marching into the internet cyberscape with the sense of entitlement to DICTATE what should and shouldn’t be said by the rest of us. Doesn’t this mimic that actions of a certain dictator from the past that the ADL would claim to have been zealously opposed to? (I won’t name names for fear of triggering some sophisticated ADL-Google-keyword-cyber-censoring mechanism).

The obvious fact is that the cabal of organizations that will be sitting down at the Cyberhate Problem-Solving Lab will likely make little mention of the impact of cyber-bullying and online hate speech on human individuals. They will be more prone to focus on how to continue hiding crimes against humanity perpetrated by the global elite since time immemorial, crimes like massive fraud, slavery, pedophilia, torture, and murder. And why would these organizations be motivated to hide these crimes? Because they are now controlled by the very global elite who are perpetrating them in the first place.
The War On Hate

The whole narrative of a group that self-identifies as having the authority ‘to curb hate speech and abuse’ on the internet is deeply flawed and even hypocritical. And employing tactics in the same mold as the failed wars on drugs, cancer, and terrorism further gives them away. These are nothing more than tactics of obfuscation of what is really going on.

Human growth is not advanced by attempts to stifle, destroy, or eradicate darkness. As I discussed in my article ‘Let’s Discard The ‘Right’ To Be Insulted By Free Speech,’ we do not evolve by stopping people from expressing any hatred or other negative emotions that are deep inside them, we evolve by allowing people to express themselves freely and becoming immune to their ‘offensive’ remarks by learning not to take them personally.

In that regard, attempts to actually do something positive about human hatred through censorship is at best naive, and in most cases like this one, it turns out to be a vehicle of domination for those who would wish to maintain and expand control over information and the self-expression of individuals.
Subscribe To Our Daily Email
Start Your Day With The Lastest News

The Need To Move Off These Platforms

The ADL aside, internet corporations like Facebook that continue to delve more deeply into censorship are playing a bit of a risky game. Perhaps many of them feel that they are ‘too big to fail,’ in the sense that they believe they are too essential to the lives of most people to suddenly get abandoned en masse. Perhaps, for now, that is true. But I’m not sure that they should really be messing with an Awakening Community that is growing larger by the heartbeat.

Collective Evolution has a few interesting ideas in this regard that we will be launching soon. Stay tuned.