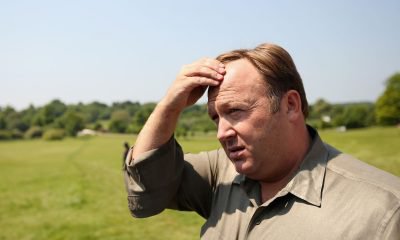 Thanks for this wonderful post C.E. I hope everybody will read this and begin to understand.

Each platform gave a simple and succinct reason: they don’t support hate speech on their platform. Interestingly, each and every platform stated the same thing. In the days that followed, more companies like MailChimp, LinkedIn and Pinterest also banned Jones and Infowars from the platform, again citing the same reasons.

Apple for example stated to BuzzFeed News, “Apple does not tolerate hate speech, and we have clear guidelines that creators and developers must follow to ensure we provide a safe environment for all of our users,” adding, “podcasts that violate these guidelines are removed from our directory.”

What many seem to be overlooking in this are two key things:
1. The major bans all came within 24 hours of one another, followed by the rest over the next couple of days
2. By banning alleged ‘hate speech,’ a precedent is set for what can happen to any journalist that crosses the imaginary line of what the mainstream will accept.

Recently, Twitter has made headlines as they have not succumbed to the public shaming and political pressure to ban Alex and Infowars. Left-leaning Vox was critical of Twitter’s CEO Jack Dorsey for not banning Infowars stating:

What’s most jarring — and disturbing — about Dorsey’s statement is its latent suggestion that all of Twitter’s progress has been a mistake. Instead, it seems to insist that the better approach should be a hands-off one, which pretends the major issues the website faces in 2018 are not inherently and irreparably politicized.

In essence, Twitter is choosing to treat the question of whether Alex Jones’s presence on the site is harmful as an issue of semantics rather than an issue of morality.

What Vox, like many others, fails to mention is that for most people, making social media websites politically slanted is not in the best interest of the people. Not only that, Twitter should be recognized in a positive light for not succumbing to public and corporate bullying about its choices. Something that shows courage in a time when everyone would rather use public shame to bait people into doing what people generally think is the best way forward.

On one hand, the mainstream is pushing a faulty narrative that Russia hacked the 2016 US election, but then doesn’t want to cover the fact that Hillary Clinton rigged the DNC primaries to oust Bernie Sanders. And further, they want to call for the banning of certain voices that threaten mainstream accepted narratives. Does this not seem like election meddling?

The challenge here is, the mainstream typically doesn’t understand any narrative outside the small viewpoint that exists within the systems they operate within. For example, as they covered this Infowars ban story they continually pointed to 9/11 as one of the major conspiracy theories that Jones would talk about. They laughed it off as if the official narrative of what happened on 9/11 being false is impossible. Yet anyone with an ounce of journalistic skill and integrity would know the official story is absolutely false, both common-sensically and scientifically. Yet they continue to tout the false narrative and refuse to go through the evidence.

What the mainstream doesn’t seem to understand is that ‘conspiracy theorists’ are not saying “this is exactly what happened on 9/11,” they are simply saying what we were told happened, didn’t. And are asking for an investigation into the truth.

The difficulty in this whole conversation is, the mainstream media culture is to laugh off any of these theories, making it so no real investigation is explored or encouraged. This creates a divide within mainstream and alternative journalists that isn’t necessary but is built so unity cannot happen. If we looked at straight facts, all journalists would be on the same page with 9/11, as the events of 9/11 do not match the official story. Period. How might that change the perception of Jones, or any other website, on matters like this?

If Infowars and Alex Jones are wrong in asking these questions about 9/11, then we have a HUGE problem on our hands that companies like Facebook, Google and Apple are fully supporting.

Now this isn’t to say Alex Jones and Infowars haven’t shared false news as well, they certainly have, and their aggressive, angry and highly emotional approach to news CAN lend to the instability of individuals who take it to heart. Which is why we feel conscious media, what we produce at CE, is so important. We provide information not with the intention of riling anyone up or getting them politically slanted, but to inform and allow them to ask good questions, see the big picture and so forth. Something the mainstream is often not brave enough to do.How These Companies Work

Firstly to get it clearly, each one of these platforms is a private company and of course has their own rules they can implement. So to play on their platform, you must play by their rules. The problem is, many realize their rules are not so much built around stopping hate speech, they are built around protecting their own political view and responding to pressures from corporate and political hands. This would include the deep state.

Further, there are extreme double standards at play here. It’s not hate speech when CNN or VOX or HuffPost trashes the opposing political party they stand for. Or if ANTIFA or certain activist groups create content trashing certain genders or races, so long as it ties in with mainstream narratives of extreme left points of view. White males are the worst, toxic masculinity is the cancer of our world, every male is a sexual abuser, the alt-right is everyone who didn’t vote for Hillary and who questions anything, and you can’t say a single thing that might offend someone… or else you’re evil. These are the narratives in mainstream media in 2018. But the moment someone challenges that narrative, it becomes a problem.

The key is, whether you are in support or not of any politician, the right to free speech is important. While Jones sometimes would get aggressive or be incorrect in his reporting, to all-out ban his platform from many major platforms on the internet shows a collusion that exists within these organizations to censor a voice. Whether this is right or wrong is up to people to decide.

It’s also important to note, just because something is shared and put on the internet doesn’t mean it’s true, that it will get liked or shared, or even commented on. It’s up to us to do ALL those things. Just because people see something in a feed, they can still ignore it. You don’t HAVE to engage with it.

What This Will Help Do

Since the ban, many believe it is only a matter of time before more outlets and voices who challenge mainstream rhetoric and manipulative agendas will also be censored. But this isn’t that bad of news. As this happens more and more, people will see quite clearly what is going on to control narratives. This will cause an even greater expansion of consciousness and demand for change.

This change will begin within the hearts and minds of people as they begin to see through the illusion and understand what’s happening. The truth of simply opting out of these platforms and games being played will be the way forward.

Let’s take the Streisand effect for example. It is a phenomenon whereby an attempt to hide, remove, or censor a piece of information has the unintended consequence of publicizing the information more widely, usually facilitated by the Internet. The more this is talked about, the bigger it gets and the more people realize what is actually happening.

The Infowars ban is not about Infowars. It’s a move to make it a culture that we, the people, have no power and need to be governed. We are being told we are too stupid to discern truth from fiction. That’s the deeper message here. If people don’t follow the herd, they are to be shamed.

In another sense, this will allow people to begin asking how else Infowars affects collective consciousness. Is it spreading false news? Are the themes and emotional slants healthy for us? Can we discern when it comes to listening to these types of voice? Or do we blindly follow?

I ask people all the time, “what world do you want to support? One where we give up all our power to governing forces because we are too afraid to take responsibility for ourselves, our emotions? Or one where we own our shit and begin to truly empower ourselves. The choice is ours.” It’s like the old saying ‘sticks and stones may break my bones but words can never hurt me.’ Yet here we are, giving so much power to words that we lose free speech, and are shamed for asking important questions about what goes on in our world. Sure, Alex is extreme at times, but this seems more like a witch hunt than anything else.

Thinking less about this immediate gratification of something, truly think about where this could go next. It was like when no one thought the glory days of Facebook sending news to people would end, yet here we are, 2018, and Facebook is no longer a driver of traffic for media websites and users to get news they want. Truly think about what could be next… who could be next.