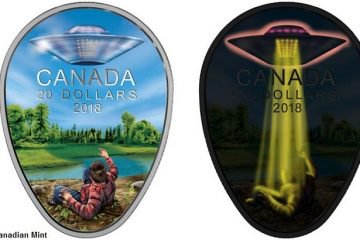 A Close Encounter with a Canadian 20$ Coin

Arjun WaliaApril 4, 2018
“There are objects in our atmosphere which are technically miles in advance of anything we can deploy… we have no means of stopping them from coming here … there is a serious possibility that we are being visited and have been visited for many years by people from outer space, from other civilizations…. This should be the subject of rigorous scientific investigation and not the subject of ‘rubbishing’ by tabloid newspapers.”
advertisement – learn more

UFO disclosure is seriously ramping up, as it seems those who call the shots have decided to begin what seems to be a process of ‘normalization,’ a sort of acclimatizing campaign designed to slowly let people know that these things are indeed real, there is ample evidence to show it, and there is a possibility that some of them could indeed be extraterrestrial. I elaborate further on that discussion in this article I published earlier that goes deeper into that discussion: It’s Official – We Now Know That UFOs or UAP Are Real – So Are They Extraterrestrial or Not

Having been a researcher in the field for more than a decade, this process of slow disclosure seems to have been unfolding for a few years now. At the same time, it’s quite clear, at least from my perspective, that those who control the secrecy around this topic, whoever they are, are split down the middle, with some wanting to maintain the secrecy and others wanting to let the world know.

Then you have the possibility of deception with regards to the information they’re putting out. Some believe we are headed towards a ‘false flag alien invasion.’  You can read more about that here.

This is a drastic contrast to what the world experienced decades ago, when there was, as the first director of the Central Intelligence Agency once said that (CIA), ” Through an official campaign of secrecy and ridicule, many citizens are led to believe the unknown flying objects are nonsense.”  (source)

Shortly after the Pentagon released videos of three UFOs (performing maneuvers that no known man-made aircraft or drone can perform), the Canadian government did the same thing, but in a different form.

You can read more about that and view the footage here, here and here.

On a side note, it’s important to mention that the military personnel related to the Pentagon UFO videos all shared their belief that there is ample evidence suggesting that we are not alone, and that we are being visited. This isn’t a surprise, but some people still don’t know that hundreds of high ranking people within academia, as well as those from within military and intelligence agencies, have all come forward sharing their knowledge and experience on the UFO/Extraterrestrial phenomenon.

To the left you’ll see what the new coins look like, from the Royal Canadian Mint. These are obviously going to be collector items. The shape of it also takes the form of the typical, what’s commonly perceive to be, an alien head.

A spokesperson for the  Mint told CTV News that, “the Royal Canadian Mint is known for having polar bears and maple leaves and beautiful natural settings on coins, but we also do a lot of coins that reflect Canada’s cultures. And some of our best Canadian stories are actually supernatural stories.”

The thing about that is, many of these stories are not supernatural, but perfectly normal and natural. One day, the ‘paranormal’ may even become normal.

This particular coin deals with what’s become known as Canada’s best known UFO incident. It’s described slightly in the news snippet below, but what’s also included is a piece of one of the UFOs that was seen. It is highly radioactive, and kept inclosed in a special shielding case.

Your Inbox Will Never Be The Same

It’s known as “The Falcon Lake Incident,” which occurred in Manitoba on May 20th, 1967. According to Stefan’s son, Stan Michalak, who co-authored a new book detailing his father’s encounter titled When They Appeared:

“I recalled seeing him in bed. He didn’t look good at all. He looked pale, haggard. . . .When I walked into the bedroom there was a huge stink in the room, like a real horrible aroma of sulphur and burnt motor. It was all around and it was coming out of his pores. It was bad.”

Below you’ll see a picture of him in the hospital after the incident, and the burn marks he has from the encounter. Stefan is one of many who have had this type of ‘evidence’ left on their body after an alleged encounter.

“One descended, according to Stefan’s account, landing on a flat section of rock and taking on more of a disc shape. The other remained in the air for a few minutes before flying off.

Believing it to be a secret U.S. military experimental craft, Stefan sat back and sketched it over the next half hour. Then he decided to approach, later recalling the warm air and smell of sulphur as he got closer, as well as a whirring sound of motors and a hissing of air.”

Stefan said he saw a “door open on the side with bright lights inside, and said he heard voices muffled by the sounds from the craft” during the encounter. He described the ship as being made of smooth metal and equipped with panels of several different coloured flashing lights. Eventually, he says, as he walked close enough to the craft to touch it, it “began to turn counter-clockwise,” and then, all of a sudden, he was “struck in the chest by a blast of air or gas that pushed him backward and set his shirt and cap ablaze.”

You can see the shirt below.

This is very reminiscent of the famous Travis Walton incident.

When Stefan made it back to civilization, he was treated at a hospital for burns to his chest and stomach that later turned into raised sores on a grid-like pattern, as you can see above. And for weeks afterwards, he suffered from diarrhea, headaches, blackouts and weight loss.

Below is a sketch done by Stefan of the craft he encountered.

What’s also interesting about this case is that, apart from the physical evidence of the encounter on Stefan’s body, there is also a piece of radioactive metal that was found from the crash site.

Below is a piece of the radioactive metal that was retrieved from the crash site in 1968, the one you see in the news broadcast below inclosed in a special radioactive shielding case.

“If it does indeed turn out that there is relevant physical evidence, if this evidence is carefully collected and analyzed, and if this analysis leads to the identification of several facts concerning the UFO phenomenon, then will be the time for scientists to step back and ask, what are these facts trying to tell us? If those facts are strong enough to lead to a firm conclusion, then will be the time to confront the more bizarre questions. If, for instance, it turns out that all physical evidence is consistent with a mundane interpretation of the causes of UFO reports, there will be little reason to continue to speculate about the role of extraterrestrial beings. If, on the other hand, the analysis of physical evidence turns up very strong evidence that objects related with UFO reports were manufactured outside the solar system, then one must obviously consider very seriously that the phenomenon involves not only extraterrestrial vehicles but probably also extraterrestrial beings.” (source)

The quote above comes from Peter Andrew Sturrock, a British Scientist, and an Emeritus Professor of Applied Physics at Stanford University. Sturrock and a number of other notable scientists around the world came together during the 1990’s in order to examine the physical evidence that is commonly associated with the UFO phenomenon. One example used by Sturrock in his analysis, was a photo taken by two Royal Canadian Air Force pilots on August 27th, 1956, in McCleod, Alberta, Canada. (“Physical Evidence Related To UFO Reports” – The Sturrock Panel Report – Electromagnetic Effects) (source) (source)

When it comes to physical evidence of UFOs, we now have accumulated many. Whether it be an actual piece from the craft, or the enormous amounts of electrooptical data and video footage, the amount of evidence available is unbelievable. “If this was a court of law, we are beyond reasonable doubt.” Those were the words of Luis Elizondo in a recent interview by I-Team Las Vegas and George Knapp. Last October, Elizondo ended his long career with the U.S. government, and with one of his most recent positions being the director of the Pentagon’s study of unknown aerial objects (ATTIP).