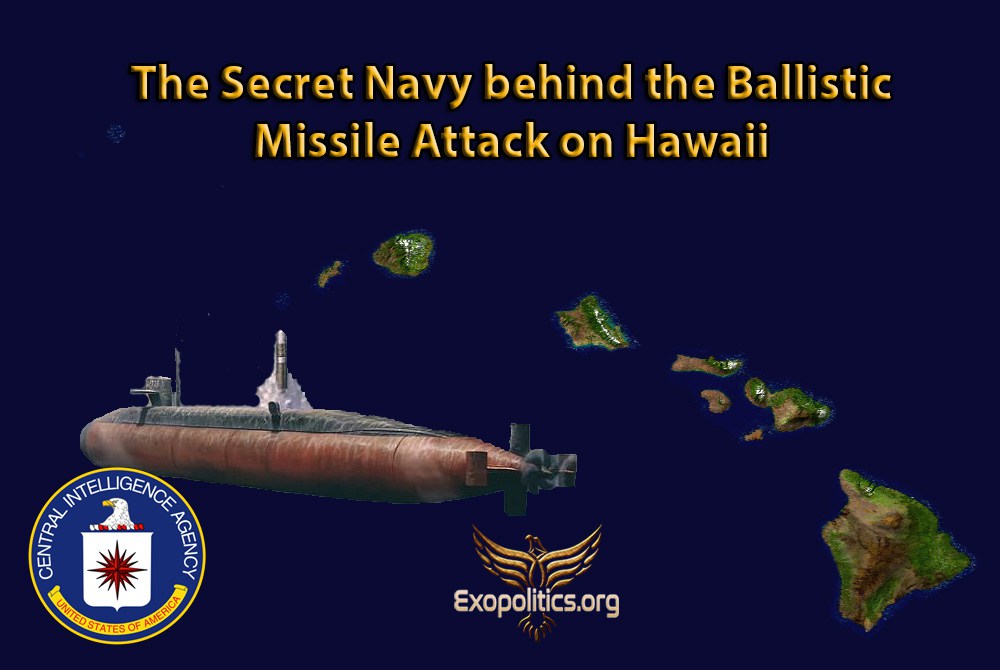 The story continues. The rest of the story you can read at http://exopolitics.org/

The Secret Navy behind the Ballistic Missile Attack on Hawaii

As information continues to emerge confirming that there was a ballistic missile attack against Hawaii that was intercepted on January 13, the investigation begins to shift from what happened, to who was responsible. In this article, I analyze various sources describing the attack, and identify the mysterious naval force that was most likely responsible for launching the ballistic missile, which presumably was nuclear armed.

In my January 17 article, I listed three alternative news sites referring to sources that all said that a ballistic missile was launched against Hawaii by a stealth submarine. The alternative news sources were radio host Dr. Dave Janda, Operation Disclosure (RV/Intelligence Alert), and the Public Intelligence Blog. The Operation Disclosure and Public Intelligence blog sites point to an Israeli submarine as responsible, while Dr. Janda said it was a submarine belonging to a rogue Chinese Navy faction.

Further corroboration for the ballistic missile attack explanation comes from former Forbes Magazine writer, Benjamin Fulford, who says that according to his insider sources, there was a submarine based attack:

One sign of this extreme tension came last week when “a missile from a cabal submarine was stopped from hitting Hawaii and the submarine was sunk,” Pentagon sources say.  Media outlets around the world have reported that Hawaiian residents all received the following warning on their mobile phones:  “BALLISTIC MISSILE THREAT INBOUND TO HAWAII, SEEK IMMEDIATE SHELTER, THIS IS NOT A DRILL,” but later this was reported to be a false alarm.  It was not—it was an attempt by “the cabal” to blame the attack on North Korea and use it as a trigger for their long-desired World War III, CIA sources say.

Both Fulford and the Public Intelligence claim that the ballistic missile was intended to simulate a North Korean attack suggesting the responsible submarine was in the vicinity of North Korea, either in the Sea of Japan or off the Japanese coastline.

In determining the type of missile attack against Hawaii, yet another source refers to a Hawaii tourist boat about 100 miles out at sea that saw what appeared to be a meteorite exploding in the air shortly before the Hawaii Emergency alert went out Saturday morning, January 13. The additional source appeared as an update to the original Public Intelligence blogsite article about the Hawaii missile attack:

Word here in Hawaii is that a group of tourists and tour guides were on a boat 100 miles off shore Saturday morning around 8 AM when they witnessed what they thought to be a meteor blowing up over the ocean. It was reported on Hawaiian channel 2 but then removed from their website. Rumour is the launch came from an Israel Dolphin 2 submarine. Some college basketball games had a red alert across the screen from US Pacific Command declaring a missile launch in the Pacific near Hawaii.