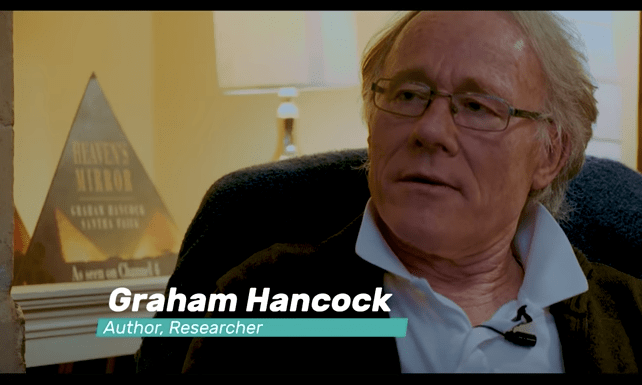 A great post showing us that the manipulation to keep us in the physical world is being revealed and continues through control with laws and manipulation and such. When we the human species are  more of a spiritual entity we are on the cusp of trying to break those physical bonds through posts like this and other teachings and articles written in the same vain and finally be free. Thanks Graham

Who is Graham Hancock?  He is the author of multiple international bestsellers, like The Magicians of the Gods, and Fingerprints of the Gods, among others. His books have sold multiple millions of copies worldwide, and are available in more than 25 languages. Obviously, with so many people, including many scholars who are into his work, when you go against the grain of conventional wisdom you’re going to receive harsh criticism from the mainstream. This is especially true if you’ve accumulated and presented evidence in a credible way which challenges the current framework of knowledge.

It’s truly fascinating to say the least. Graham has written for us in the past and the article linked below is authored by him if you want to get a taste of his work and his sources of information:

A couple of years ago Graham gave a TED talk that went viral titled The War on Consciousness. It’s an interesting title, and the first thing that comes to my mind when reading the title alone is the idea that yes, there is a war on our consciousness, in several different ways.

One would be through mass media, and the manipulation of information. Our external world is constantly beaming us with how we should think, what we should do, how we should live our lives and what is considered real or not.

Another would be through the mass censorship of information.

His TED talk (linked below) simply went against the grain. It’s not that his information and ideas were invalid, it’s simply exploring a topic that is feared by the mainstream. When new information is presented in a credible way that challenges old frameworks of information, harsh responses and actions are always seen.

What we think we know is always changing.

These are the change-makers, the ones who receive so much criticism, yet so much praise at the same time. Clearly, they’re doing something right, and upsetting many authority figures along the way.

Graham, in his banned talk, makes the argument that modern society does not allow us to truly explore our consciousness by making various psychedelic drugs illegal. How this is offensive in the mainstream is understandable, given the fact that psychedelic substances have been banned from research for years. Now, the ban has lifted, and their ability to treat multiple medical disorders, among other things, is starting to come to light.

He makes the point that the fact that society is not openly allowed to explore our own consciousness with complete freedom is wrong.

I can understand his viewpoint, although I do not take psychedelic substances myself, I do believe, just as the scientific research has shown, that they can be very beneficial and that individuals should have the right to explore them if they choose to do so. Who is “the man” to tell us what we can and can’t do with ourselves? Especially in light of evidence showing that they can be used in a non-harmful way, and that they’re really harmful at all

It’s quite odd how the substances which are legal today are much more life threatening and harmful than most illegal ones.

Related CE Article: One Doctor, Out of Many, Explains How Prescription Drugs Are Killing Us

“There was a concerted effort to discredit me and that is a bit of a conspiracy…When you have academics that write to the BBC and they say, “you must bring this man down”…When they actually say that and the BBC makes a program which is designed to damage my reputation, and that program is then later found to have been unfair by the broadcasting standards commission, something odd is going on here, something a little bit to do with reality control is happening there.” (source)

Graham explained TED and their decision to ban his talk was the result of their belief that he was speaking about “pseudoscientific ideas.” Like most who label information as pseudoscientific, no support was provided to justify that.

Another great example would be non-material science. Despite the fact that it is clearly a scientific undertaking by the most prominent scientists, with a tremendous amount of statistically significant results, non-material science is still shunned, for the most part, in mainstream academic circles. You can read more about that in detail, with specific points, here.

To view Grahams FULL talk that was banned, you can click here.