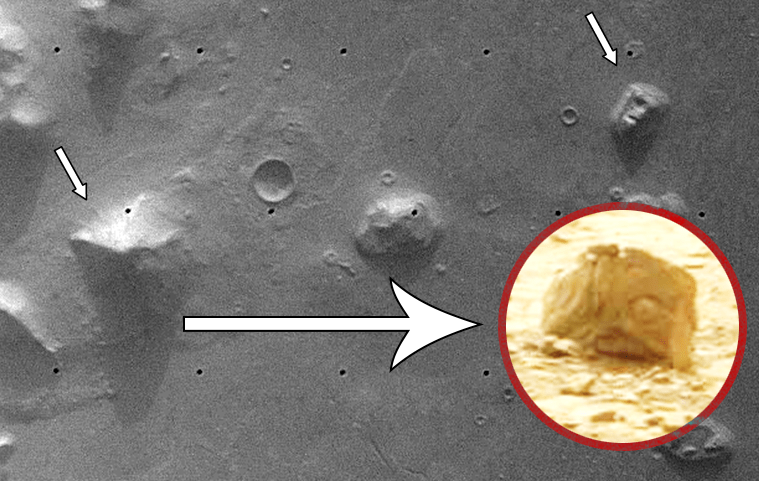 Has I am currently reading The Monuments of MARS A City on the Edge of Forever by Richard C. Hoagland I believe it was written in the early 2000’s and it is the fifth edition I thought this article was fitting and deserved a post. Enjoy the read.

A lot of people reading the title of this article are probably rolling their eyes, and that’s a problem. Paradigm-changing discoveries are being made every day, and if these discoveries don’t make mainstream media headlines, people dismiss them as fake news, conspiracy theories, or pseudoscience. But the small group of people who control mainstream media also have control over our perception of reality, over what we consider to be real or not real, and that’s a problem.

The world has witnessed the birth of several different “alternative” news outlets in response to this issue, yet the information they provide never makes mainstream headlines despite coming from credible sources. This has especially been the case when it comes to UFOs, extraterrestrials, and life on other planets.

Despite studies being published in multiple peer-reviewed scientific journals bringing forth some very intriguing questions, this type of information is still greeted with skepticism more often than not, though things are slowly changing. As we move through 2018 and beyond, more people will become open and aware to the idea that we are not alone, that we’ve never been alone, and that there is plenty of evidence to prove these claims.

One person working to prove them is Dr. John Brandenburg, a well-known and respected plasma physicist who joined a number of colleagues in blowing the whistle on the need for disclosure. They argue there are things “out there” that have been deliberately kept from us. Whether this information has been concealed because the human race is not ready for this information, that it’s just too “mind-altering” and would change too many things, or because its disclosure would threaten to various corporate interests, remains unclear and too broad a subject to tackle here.

Since coming out, Brandenburg has been ridiculed by the mainstream, as any Department of Defense scientist making such claims would be, but the information he shares correlates with scores of other papers and documents available in the public domain, as well as the information that’s been shared by a number of scholars over the years, about this subject.

We’ve presented his work in multiple articles, but he has now come out with new revelations.

Brandenburg worked for NASA for a number of years. He was also the Deputy Manager of the Clementine Mission to the Moon, which was part of a joint space project between the Ballistic Missile Defence Organization (BMDO) and NASA. The mission discovered water at the Moon’s poles in 1994. (Source: page 16 of 18)(source)(source).

We’ve mentioned this before, but it’s important to mention again:

The more we observe Mars, the more information we’re getting that it really is a fascinating planet, from the Curiosity Rover we now know that Mars once was like a planet very much like Earth, with long salty seas, with fresh water lakes, probably with snow capped peaks and clouds and a water cycle just like we’re studying here on Earth. . . . Something has happened to Mars, it lost its water.

The quote above is from John Grunsfeld, a five-time space flow astronaut and associate administrator of NASA’s Science Mission Directive. It was given at a NASA press conference where representatives told the world that there is a water Mars, that it’s not the dry, arid planet we imagined it to be, and that it was once very much Earth-like and still holds the possibility of harbouring life. After all, water means life.

In that conference, they admit to a drastic atmospheric shift that occurred on Mars which took it from its Earth-like composition to the one we see today. They provide no explanation for how this happened.

According to Brandenburg, there was a nuclear blast that completely changed the planet (the changes mentioned at the press conference linked in the above paragraph. He states:

“The question has been raise as to why a superabundance of Xe 129 in the Mars atmosphere, relative to every other major planetary isotopic reservoir in the Solar System can be considered as “nuclear weapon” signature on mars (1,2). In this brief  article I will summarize how Xe 129 superabundance occurs physically and is associated in the open literature with “fast neutron fission” found in supernova – the close physical analog to a hydrogen bomb explosion (3,4,5). I will also show that Earth atmospheric data compared between 1937 (1), just before the dawn of the nuclear age, and that done in 1950 and 1978, clearly shows an increase of Xe 129 from 1937 relative to other Xe isotopes and can therefore be associated with open air nuclear weapon testing and plutonium production, which itself produces large amounts of fast neutron fission of Uranium and Plutonium isotopes.”

Multiple intelligently designed structures have been detected on Mars. We’ve written about this before, which you can see in the below articles.

Important Heavily Sourced Articles To Go Through To Have A Better Understanding of The Face, Pyramid & Ancient Civilization Which Exist/Existed On Mars

Brandenburg hypothesizes that these nuclear isotopes can be detected because a large nuclear blast took place, a blast that was responsible for the atmospheric shift seen on Mars. According to Brandenburg, another civilization that was living on Mars at the time is likely responsible.

You can refer to the linked articles above to see more evidence and why multiple scientists believe there was once an intelligent civilization on Mars, comprised of millions of people, as well as pictures and information of the famous “Face” and pyramids found on Mars.

A new image of the of the “Aztec Head,” imaged by the Curiosity Rover, has been found Confirming the Teeth in the Mouth. Here is the discovery frame 0184MRO925102000E1_DXXX

Here is an enlargement of the Aztec Head, which appears to be a damaged carving depicting a distorted human face with ornaments.

In the author’s opinion, this object is a carved artifact and its presence on Mars is entirely consistent with the Cydonian Hypothesis of a widespread humanoid civilization on Mars that dates from a long period of Earth-like climate on Mars.

New images from Cydonia also appear to support the Cydonian Hypothesis.  An area of the D&M (DiPietro and Molenaar) Pyramid  (left arrow), which is near the Cydonian Face (right arrow), shows what appears to be a square doorway.

Enlarged images of the D&M Pyramid show what appears to be a square doorway.